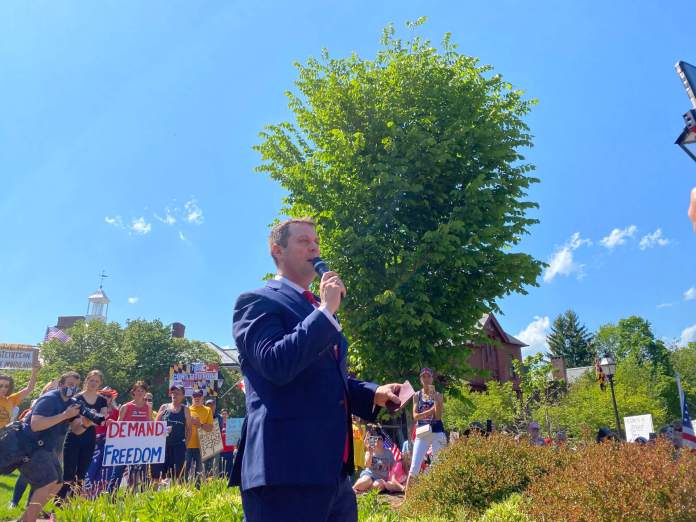 “I am co-hosting two buses to the Million MAGA March/Rally with the Frederick County Conservative Club in support of  President Trump @realDonaldTrump on January 6, 2021 to #StoptheSteal,” he wrote on Twitter on Jan. 1.

This effort was in partnership with the Frederick County Conservative Club. A third bus was eventually added on.

It is unclear how long the group was in Washington or if any of its members participated in the attack on the Capitol.

The Frederick County Conservative Club declined to comment. Maryland Matters made several attempts to reach Cox but has yet to receive a response.

On Facebook, Fred Propheter, the club’s president, “condemned” the behavior of the insurrectionists, but called the terrorist attack “mild” in comparison to the riots that followed the death of George Floyd over the summer.

“No, this is not a ‘yeah, what aboutism’. This was nearly 2,000,000 Patriots who came to the seat of our national government to redress our grievances with said government,” Propheter wrote on the club’s public Facebook page. “The lawlessness of the .0001% of today’s crowd in no way shape or form is representative of the Conservative movement. Those were Antifa infiltrators and agitators with a few Trump supporters thrown in.”

Cox has not criticized the behavior of yesterday’s rioters.

Rather, he expressed his support for Henry “Enrique” Tarrio, the leader of the far-right organization the Proud Boys, prior to Wednesday’s rally, and called Vice President Mike Pence a “traitor” in a tweet during the insurrection on Capitol Hill.

Troubled by his assertion, some of Cox’s colleagues in the General Assembly responded.https://platform.twitter.com/embed/index.html?creatorScreenName=marylandmatters&dnt=true&embedId=twitter-widget-1&frame=false&hideCard=false&hideThread=false&id=1346916841093001222&lang=en&origin=https%3A%2F%2Fwww.marylandmatters.org%2F2021%2F01%2F07%2Fdel-cox-arranged-buses-to-violent-trump-rally-calls-vice-president-a-traitor%2F&siteScreenName=marylandmatters&theme=light&widgetsVersion=ed20a2b%3A1601588405575&width=550px

“Dan, you are better than this,” Del. Jazz M. Lewis (D-Prince George’s) said on Twitter. “Please don’t cosign this lawlessness.”

“This is insane. What the hell is wrong with him,” wrote Del. Kirill Reznik (D-Montgomery).https://platform.twitter.com/embed/index.html?creatorScreenName=marylandmatters&dnt=true&embedId=twitter-widget-2&frame=false&hideCard=false&hideThread=false&id=1346916559692902407&lang=en&origin=https%3A%2F%2Fwww.marylandmatters.org%2F2021%2F01%2F07%2Fdel-cox-arranged-buses-to-violent-trump-rally-calls-vice-president-a-traitor%2F&siteScreenName=marylandmatters&theme=light&widgetsVersion=ed20a2b%3A1601588405575&width=550px

Cox continued to tweet and retweet into the evening about unconfirmed allegations that members of the anti-fascist movement started the riot, which he compared to the hordes of women who descended upon the Capitol during Supreme Court Justice Brett M. Kavanaugh’s confirmation hearing in 2018 and the protests that occurred in Washington over the summer.

Further, he retweeted a bootleg version of the video Trump posted Wednesday during the attack where Trump asked the rioters to “go home” while also insisting that the results of the Nov. 3 election were “fraudulent.”

“Go home. We love you — you’re very special,” the president said. “You’ve seen what happens. You see the way others are treated that are so bad and so evil. I know how you feel. But go home and go home in peace.”

On Thursday night, the Frederick County Democratic Central Committee started a letter-writing campaign requesting Cox’s expulsion from the General Assembly. A sample email shared by the committee reads: “I believe that allowing Delegate Cox to spread blatant falsehoods and foment insurrection without consequences creates a dangerous precedent. I urge his immediate expulsion from the House of Delegates. Leaders are tested in times of crisis; I’m looking for you to lead and call for his expulsion.”