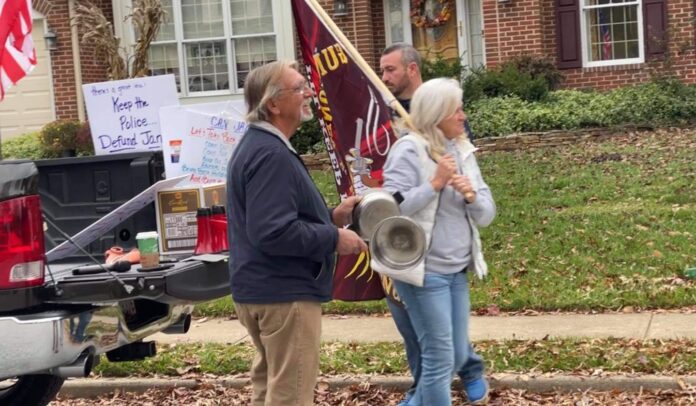 The Frederick County Conservative Club has stepped up to fill the void left in this county by years of weak Republican representation.  FCCC President Fred Propheter said they are the “biggest conservative voice in this town right now.”  He said, “Someone had to do something about the ‘Janny State.’”

On the morning of November 21, 2020 at 8:00 a.m. a small passionate group of citizens from Frederick, Westminster and Hagerstown arrived in front of the home of County Executive Jan Gardner for what they called a “Pots & Pans” protest put together by the FCCC.

The group of 30 protestors in attendance wanted to voice their concerns to Mrs. Gardner directly.  She supports Governor Hogan’s mandates, and they want it known they do not approve.

The group is outraged by elected representatives believing they have the right to demand members of the public wear face masks outside along with strongly encouraging them NOT to have family and loved ones over for Thanksgiving.

These threats come with the possibility of a $250 fine for the first offense going up to as much as $500 as reported by the Washington Times.

Only the most vulnerable government employees lost their paycheck during the lock downs of this pandemic.  Think bus drivers and school cafeteria workers.  Thousands of Marylander’s and Frederick citizens have lost their jobs.  Some beloved family businesses now cease to exist.  Average taxpayers are struggling to make ends meet while full-time government employees remain protected.  Some even got a pay raise. Why?

The Frederick County Health Department said, “While we are not currently seeing the high rates from COVID-19 that we saw in the spring, we are definitely seeing more in the recent weeks than over the summer.”  It’s flu season, so this would not be out of the ordinary.

The Maryland Health Department reports 823 Emergency Room visits for “Influenza Like Illness” for the 2020-21 flu season so far but isn’t beating the same drums of panic.

Hogan and Gardner are the Grinches who are trying to steal Thanksgiving and Christmas after having already solen mental health, personal safety, joyful living, dignity, education, savings, paychecks, 401(k)s and jobs.

Both Hogan and Gardner can reverse course at any time.  They should in light of the fact on November 18 a Danish study on the effectiveness of mask wearing was released showing masks make no significant difference in keeping the public safe from covid-19; contradicting Center for Disease Control guidelines.  The CDC has flip-flopped their stance on this issue so often, few people take them seriously and believe their office has been politicized.

On November 20, 2020 Nature Communications reported that according to a study of Wuhan, China residents, asymptomatic carriers were also not considered a threat. “Virus cultures were negative for all asymptomatic positive and repositive cases, indicating no “viable virus” in positive cases detected in this study.”

Why do Hogan and Gardner insist on over-reacting and putting your life and livelihood at risk?  Suicide and domestic violence are up.  Our children are suffering mentally due to the social isolation.  Human suffering is through the roof as a direct result of the actions taken by Hogan, Gardner, and the other county’s officials.

Maryland’s coronavirus web portal shows even though cases are going up, serious illnesses remain low.  It would be helpful to the pubic if the state would simultaneously compare flu cases since we are in flu season.  Perhaps it’s because flu numbers have flatlined?

Protesters Saturday morning demanded their “freedom back” and “liberty” be respected.  Considering current metrics there is no logical reason to continue with the State of Emergency still imposed by Governor Hogan.  The “emergency” was over months ago, however tyranny remains in its place.

Citizens should be beating their pots and pans on his and their county representative’s door steps every morning until the “emergency” is lifted.

No Christmas, No peace!