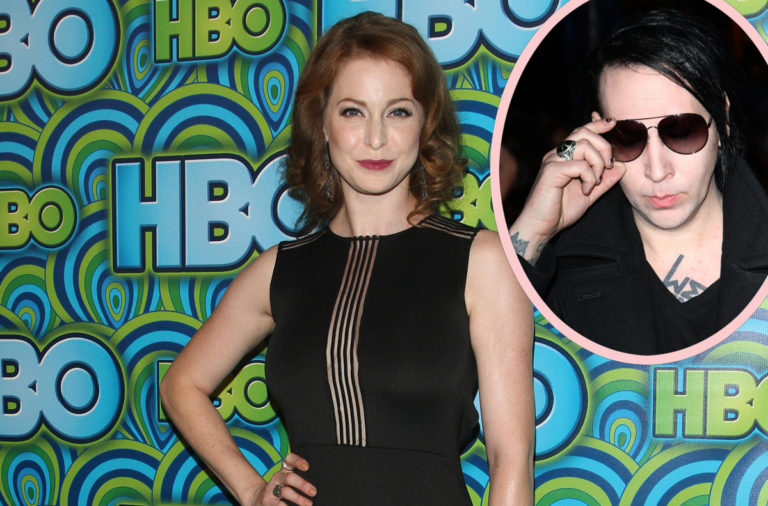 These Marilyn Manson accusations are about to explode.

Over the past two weeks we’ve been watching carefully as more and more women have spoken out about their treatment at the hands of the Beautiful People singer.

On Wednesday, the Game of Thrones actress came forward for the first time with the story of her relationship with the shock rocker. And Manson’s former personal assistant even corroborated it, giving more info about the logistics of how he kept up similar relationships with multiple women at once. It’s a twisted, tragic tale. You can read the whole thing HERE.

In a followup interview with GMA, the British model — whom you probably recognize as prostitute-turned-spy Ros from the first few seasons of GOT — spoke more to the violence and potential criminal activities of her ex.

She summed up for the program:

“I was coerced, I was defrauded, I was transported from the UK to the US, I was harbored, and then I was coerced into involuntarily servitude, which included sexual abuse and physical abuse.”

That abuse included cutting her with a knife, starving her, and scarring her back with a whip, she alleged, explaining:

“I was given nothing to eat, he gave me drugs and alcohol, and I essentially was not allowed to leave.”

As a Manson fan as a teenager, she even forgave him for what she was led to believe was done in the name of his art:

“He locked me in his bedroom, tied me to a wooden prayer kneeler. I was half naked, and he would beat me with a whip.”

That we have evidence of, as she posted a photo of the damage on her Instagram nearly two years before going public with the name of her abuser:

It’s not just photo evidence Bianco has. She said in text messages, her then-boyfriend wrote to her that he wanted to “murder other women” or “sneak down to the room where I was sleeping and rape me.”

She also described the same biting as Jenna Jameson remembered from her short time with Manson:

“The biting, that was 100% non-consensual. And he would bite me till I was black and blue.”

In addition to showing her GOT nude scenes on repeat to his party guests, Esme says Manson relished “pulling up her dress to show them bruises that he’d given her.” Ugh.

Eventually she left over the most terrifying incident. She said Manson, AKA Brian Warner, accused her of putting cockroaches in the walls to “mess with him.” When she defended herself against the ludicrous accusation, things got scary. Like horror movie scary:

“I tried to calm him down, and then he started chasing me with the ax. At that point, I thought, he’s going to kill me.”

She did not break up with him — she fled the house while he was sleeping. That sounds like an abusive relationship to us. Here’s the interview in full (below):

But as disturbing as these recollections may be, it gets even worse. Her attorney Jay Ellwanger told ABC News his client had also been interviewed this week by none other than the FBI — at their request! He said agents were interested in any evidence Bianco had relating to “human trafficking and s*x crimes,” which she gladly turned over.

Is Manson really being investigated for human trafficking?? A lawyer would know better than to make such a potentially defamatory statement if it weren’t true, right?? The FBI would not confirm or deny an active investigation to ABC, but… that’s huge.

Esme, for her part, is calling her treatment at Manson’s hands exactly that. In a new statement released to IG on Thursday, she wrote (parts in bold are for our emphasis):

“I am naming the person who abused and human trafficked me. His name is Marilyn Manson, born Brian Hugh Warner. I am coming forward after years of living with the unthinkable trauma I endured at the hands of the serial predator known to many as Marilyn Manson. I am speaking up now, in my own way, and sharing this story with others because he must be held accountable. No one should ever go through what I – and so many other survivors – have experienced. It’s important that we all understand that people can be abused and trafficked by intimate partners, boyfriends, and husbands. We must address the misconceptions around human trafficking because it can happen to anyone like it happened to me.“

Yeah. Human trafficking. If he brought her into his home under false pretenses and wouldn’t let her leave… that counts, right? Yowza. Not what we expected. Manson has denied claims of abuse by Wood and others, calling their allegations “horrible distortions of reality.” We wonder if he’ll soon have to use that defense with the FBI.