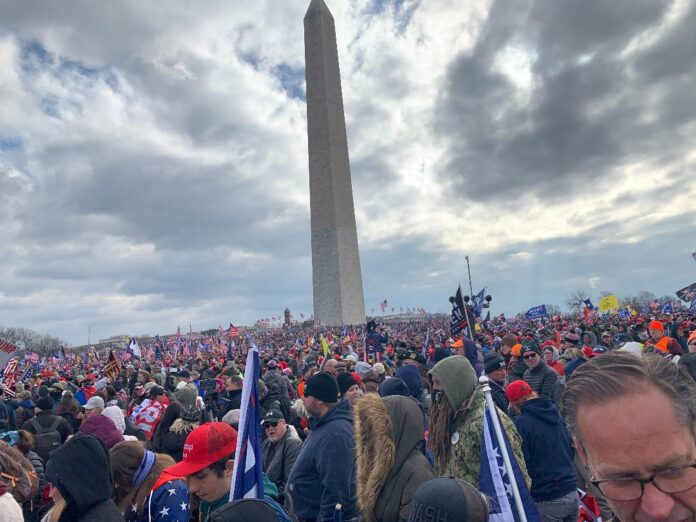 We just wrapped up a bus trip to support President Trump and the Constitutional process that was to take place on January 6, 2021. 150 Patriots, along with Delegate Dan Cox (R-LD4) on 3 busses descended onto the grounds of the Washington Monument and were immediately swallowed up by the sea of Americana bedecked Patriots already waiting.

After speeches by Rudy Giuliani and Lin Wood there was a 30–40-minute lull filled with music.  Yours truly decided to meander through the crowd – a) in search of a restroom and b) to try to get closer. I managed to find relief but trying to get through the crowd proved to be an exercise in futility.

After President Trump’s inspiring speech, it was a 15+ block walk to the Capitol. I’m either getting too old or too out of shape for this. Nevertheless, I trudged on, and I will again and again in the name of Liberty and Freedom!

We were at the Capitol for one thing and one thing only, to have our voices heard. As granted by our First Amendment, we gathered to redress our grievances with our government and the sham they called the electoral process.

We are not them, we were not there to kill, maim or destroy in any way, manner or form. That is not to say that there were not agitators in the crowd. I have been to several of these and we do not come decked in para-military gear, wearing face shields, gas masks and brandishing police style body shields. That is trademark Antifa. You know, the fascist supposed anti-fascist.

All was quiet for a while. I was talking with my ‘neighbors’ as it were, from all over the country and all walks of life. Vietnamese refugees, eastern bloc refugees who see the writing on the wall as to where this great experiment we call America is headed. 2pm it starts. Agitators rocking the barricades, encouraging those around them. Trumpians getting excited, caught up in the mob mentality.

The Capitol Hill police move in and start hosing the frontline with tear gas, dropping concussion grenades and firing rubber bullets. At that point I am calling my bus captains to gather their crews and start the 19 block walk to the designated pick-up area. Forty-five minutes later we are all back on our designated busses, relatively unscathed. A few were close enough to get hit with tear-gas, a couple more had their ears rung by the concussion grenades and 2 got hit by stray rubber bullets.

I can proudly say that the Frederick County Conservative Club carried no terrorists or miscreants to the rally of over 1.5 Million Patriots and all 150+ made it home.

Fred Propheter is President of the Frederick County Conservative Club