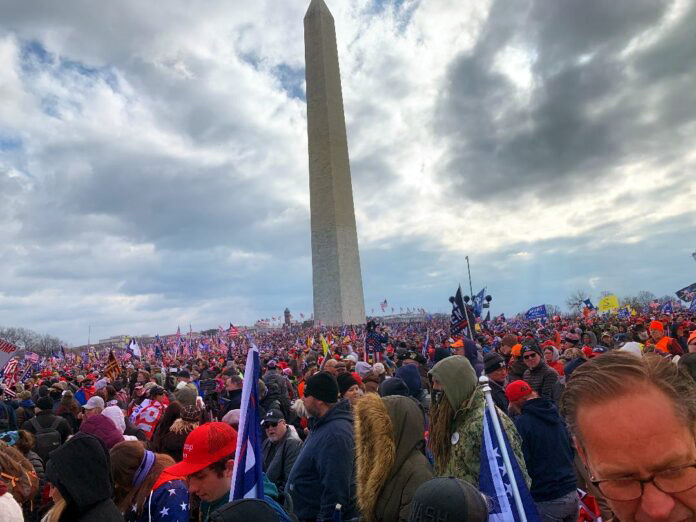 It was a cold January morning when my friend and I boarded a bus departing from Fredrick at 0900. The bus arrived in Washington D.C. at 1000. Everyone on the bus was thrilled to be part of history. We were praying for a good outcome concerning the country that we love. Military and police officers accompanied us on the bus. They walked us through the requisite instructions in case events spiraled out of control once we arrived downtown.

We headed to the National Monument as soon as we arrived in Washington D.C. Thousands of people were milling in and around the Ellipse close to the White House with crowds fanning the area beyond the Washington Monument. This show of support for our President was amazing!

We had quite an epic walk despite the cold weather, windy conditions, and clouds overhead. Donald Trump Jr. was speaking as we approached the Washington Monument and Rudy Giuliani spoke afterward. President Trump arrived at the podium about 1150 and spoke for about an hour. He asked everyone to walk down to Pennsylvania Avenue to the Capitol building and encouraged rally participants show support in a peaceful manner.

The walk from the Washington Monument was full of gaiety with people singing and waving flags. I saw families and many young people accompanied by their parents and grandparents. During the walk, I also noticed individuals in the crowd who wore helmets and were carrying gear resembling black satchels or square bookbags. These individuals stood out in sharp contrast to the other rally participants who struck me as freedom loving people.

Our deadline was to return to the location where the bus was parked by 1530 so we decided to maximize our time by heading to the Capitol Building before Trump ended his speech. We met many more like-minded people along the way and all of us felt encouraged by our President to support this great Republic by endorsing FREE and FAIR Elections. I met Americans who immigrated from Cuba, Vietnam, China, Iran and Iraq to name a few countries. I also witnessed several individuals who were speaking to police officers and the latter were handing out bottled water.

We continued our peaceful march, and I took pictures as I had not visited the National Mall since 2019. I had been afraid to go downtown following the widespread destruction wrought by the rioters from the Black Lives Matter and Antifa movements. The most terrifying of these was the attack of the White House and the fire at St. John’s Episcopal Church, where US presidents regularly attend religious services. As I walked, I had the opportunity to speak to people in the crowd who were visiting from different states. Many of these were first-generation immigrants, and all of us were in very good spirits. Many of us stated that the US is still the best country in the world to live in. We also discussed the need for fairness in our republic.

We neared the Capitol Reflecting Pool around 1400 and around 1414 l could see that some individuals had broken through the barriers. They were climbing up the Capitol steps. It caught my attention that DC police officers were assisting these individuals to cross the barriers. Only later did I discover that people had gained entry into the Capitol building; I was unaware of this fact while I was on the premises of the reflecting pool of the Capitol Building.  I took several pictures when suddenly I noticed that grenade were detonating, and a gaseous substance appeared in the air. I also heard a loud noise that sounded like a canon boom; however, I could not tell what direction it was coming from. A yellow cloud appeared, and I could feel a stinging sensation in my eyes.

While all of this was happening, I overheard a young man from Arkansas declare the need to fight for free and fair elections. He spoke about the events that had transpired in Czechoslovakia in 1968 when the former Soviet Union led Warsaw Pact troops in an invasion of my country of origin to crack down on reformist trends in Prague. I approached the young man and revealed to him that I had endured the “communist nightmare” and was only eleven years old when the Russians occupied my homeland and struck down our freedom.

Everyone who participated in the rally did so in a peaceful manner and the participants—average Americans–surrounded all sides of the Capitol Building, the National Mall and adjacent streets. The crowds fanned out from the Capitol building to the National Monument. A huge American flag traveled past us and went all the way up to the reflecting pool. The crowd was full of passion for this country.

By this time, all of us had heard the news of Mike Pence’s actions in refusing to block the confirmation of Joe Biden’s election, resulting in a widespread disappointment. We suddenly heard that people were storming the Capitol building and had breached the interior. We could not believe what we were hearing as this was not the aim our peaceful rally. We left the Capitol Reflective pool area about 1440 and walked back to our bus that was scheduled to leave at 1530. At approximately 1450 a National alert came across our phones stating that DC Mayor Muriel Bowser had imposed a 1800-0600 am curfew.

On our way to the bus, we passed at least 10 individuals who struck me as being obvious members of Antifa, as they were dressed in black and wielded baseball bats and rubber batons. I saw them heading toward the Capitol. I also took pictures of black vans with New York license plates. The National Guard troops were standing around the vans and waiting. (I also noticed that the cherry trees were blossoming and took a picture of the trees.) The streets were starting to shut down and buildings were being boarded up.

We heard that an unarmed Make America Great Again (MAGA) attendee, Ashley Babbitt, lost her life in the Capitol building at the hands of the Capitol police. She was a Navy veteran, and I am wondering why nobody is outraged and why nobody mentions her by name. We need to take a hard look at the double standards in the US.

I attended the MAGA march because I lived in a communist country; I know first-hand what it means to lose one’s freedom. I came here to stand for free and fair elections. I came here to stand for all the things that great Americans heroes have a died for…… so that we might have the right to live in “the land of the free and the home of the brave” – and not simply subsist under the control of government dictators.

I came to the MAGA march to show support for President Trump. He has stood by and fought for the American people. It is time for us stand up for Trump and the American constitution.

I came to the MAGA march to support our great republic and support FREE and FAIR ELECTIONS!

Many of you do not know what is at stake — some of you have different opinions and do not like President Trump, and that is OK. More than a million individuals, I included, came to the rally on January 6, 2021 to ensure your right to disagree.

On the way to Frederick all of us prayed for our great republic. Amen (Let it be so).

“ALL IT TAKES FOR EVIL TO PREVAIL IS FOR GOOD PEOPLE TO DO NOTHING.” EDMUND BURKE

“OUR CONSTITUTION WAS MADE ONLY FOR A MORAL AND RELIGIOUS PEOPLE. IT IS WHOLLY INADEQUATE TO THE GOVERNMENT OF ANY OTHER.” JOHN ADAMS