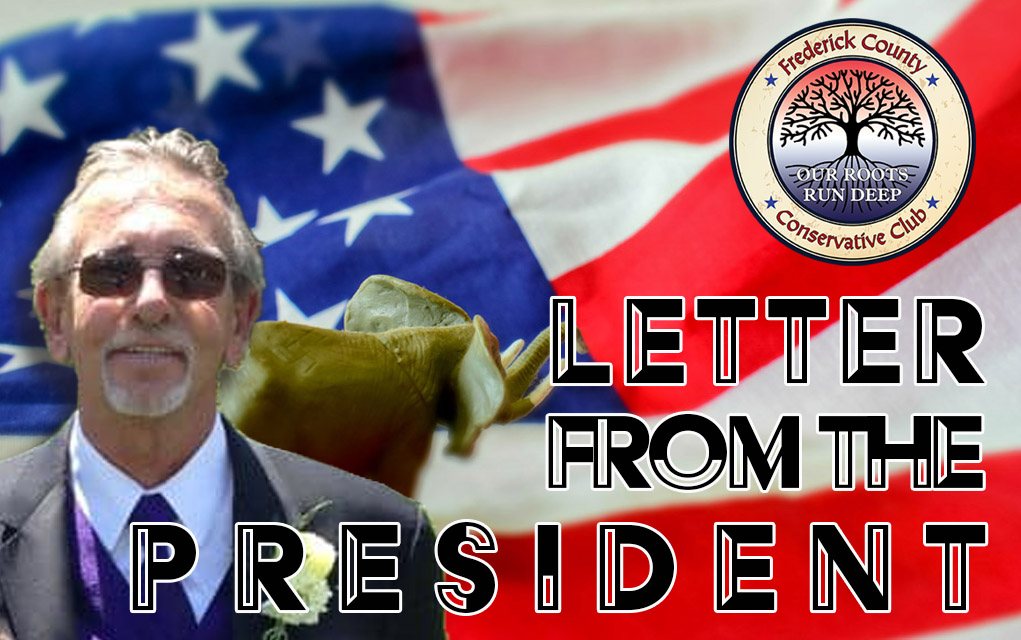 As we look out our windows, we see the promise of renewal known as Spring, yet when we open said window, we know the temperatures have some catching up to do. The same can be said for our Conservative movement. Our numbers have grown exponentially with eager Patriots ready to ‘right this ship’ and stear a course back to center-right, as far away from Gomorrah, where we are headed now.

Our upcoming meeting on Wednesday April 14, 6:30pm at The Buckeystown Pub will be centered on organizing for the ’21 & ’22 elections. This will be a closed meeting for dues paying members and their invited guests. We may have a special guest but, no promises at this point.

The town of Woodsboro has their local election coming up on May 8th. The Town Burgess and 2 Commissioner seats are up for election. As of this writing only a single candidate, Heath Barnes has thrown his hat into the proverbial ring. Nominations will be accepted at Woodsboro’s town meeting on April 13, 7pm in the meeting room at the back of St Johns Church on N Second Street.

Having said that, I received a note from a member who shall remain nameless, expressing their concerns about the candidacy of Mr Barnes. Here it is verbatim:   The town of Woodsboro will be in need of a Burgess soon. It has come to my attention that no conservatives have stepped up to run for the position. The only person to step up, unfortunately, is a certified RINO, Mr. Heath Barnes. He lacks the leadership required for the office. He has shown an inability to stand for what is right. He participated in a protest at CE Jan Gardner’s house a few months back, it was a protest against her draconian restrictions placed on businesses in Frederick County. These restrictions were costing private businesses owners everything, their money, their livelihoods and in some cases, their homes. After the protest, Mr Barnes decides people losing everything was ok with him, but disturbing the CE’s weekend was inexcusable and wrote her an apology letter, asking for her forgiveness’s. It was ok with Mr. Barnes that her overreaching restrictions were choking out local businesses, but disturbing her weekend was not. The second he did that, he spit in the face of every struggling business owner in Frederick County, including those in Woodsboro. He has also attacked other Republicans/Conservatives on social media, accusing them of not being “involved” enough. But as soon as the truth comes out and Mr. Barnes is proven wrong; does he apologize for the false accusations? No, he simply deletes what he said and moves on.

Mr. Barnes doesn’t have what it takes to lead logically and is led by his emotions. That’s not what a true leader does, a true leader stands up and does what is needed, not what is easy. Woodsboro deserves a strong Conservative Burgess. This club made a promise to support only true conservative candidates, so with that in mind we are in the process of reaching out to people just like that for those position. So please, wait and support a true leader and Conservative and not the first Johnny come lately. We wish Mr. Barnes the best in any other future endeavors.

In other news, one of our members, Matt Breeding, President of Washington County Republican Club has organized a HQL (Handgun Qualification License) Class. The cost of a HQL is normally $250-$290. Matt has secured a real deal, just $150 which includes eye protection, ear protection, targets and loaner handguns, both semi-auto and revolver. We are looking for 5 member and one alternate to participate. We encourage the ladies to sign up.

As Holy Week comes to a close we wish the Tribesmen amongst us Happy Passover and our Christians a Happy Easter.See you April 14 at The Buckeyestown Pub!!

“The flower that wilted last year is gone. Petals once fallen are fallen forever. Flowers do not return in the spring, rather they are replaced. It is in this difference between returned and replaced that the price of renewal is paid.
And as it is for spring flowers, so it is for us.”― Daniel Abraham